I don’t have one- and that’s all he wants today. There has been a lot of crying today. It didn’t start out that way. I had today by the balls. I was awake at 8:30am and Arlo was still asleep. I decided to get up and brush my teeth and make my coffee- and I did- all before he woke up- that’s a huge win right there. I decided to push my luck farther- I set up a sprinkler in both the front and back yard. And then? Yeah, there’s more- then I fixed a mobile (not phone), a paper and monofilament mobile that I got tangled in and broke last week. I had a real dad morning today- almost one like Peter, my neighbor, who has two kids and does yard work in the six o’clock hour. I wrote about him in Routine before I was a dad.

It was a wake-up like any other morning. I started hearing some mouth noises and movement so I went and picked him up, got him out of his swaddle sleep sack, changed his diaper, and started warming water for his bottle. He seemed happy. He smiled- I would like to think. Birds were chirping and the sun was shining- and then I tried to feed him.

It was like any other time- I thought. I put the nipple in his mouth and he kinda gummed it a little and then spit it out. Again, I tried, again he refused. This happened a couple more times until he grabbed it with his gummies and tried biting the thing in half like a dog shakes its toy. Then his face smooshed and turned red and the cries begun. There wasn’t any “easing into it”- he just flat out busted out cries like it was the worst day of his life so far (maybe it was going to be).

This has happened before. Arlo started getting real icky about the bottle a month ago- right before Kylie was going back to work. Him and I hung out one Sunday morning and had what I like to call, a bottle boot camp. For an entire morning he cried at me, I cried at him, we cried at each other- and I think Kylie cried just from listening to us cry. He finally took the bottle at around noon that day, and everything has been fine since- I thought.

Today’s bottle boot camp has lasted the entire day. Wait wait wait! He has eaten today, just not his normal amount. That first bottle this morning? He cried himself to sleep in my arms after refusing the bottle for about an hour. I then tricked him into eating a bit while he slept- I think he dreamt ate- but only about an ounce. I figured he was going to be starving when he woke up so I had a larger than normal bottle on deck. Again, crying and screaming and some kicking- I had to shut the back door in fear of what the neighbors would think. Can’t let that Peter think I don’t have a handle on this guy.

I found Arlo an odd sight today while he cried. He has a huge bottom lip that seems to expand to unimaginable proportions when he’s angry. He also has a case of cradle cap that is wildly visible under his thinning hair- it basically looks like scaly skin- it’s normal for some babies, I think. He also seemed to have some accumulated weird baby dirt between his fingers and under his nails. I think we would all agree that nobody’s face is pretty when they cry- and that goes for him too. Let’s just say he wasn’t the most pleasant thing to look at today.

That second bottle? He didn’t touch it. Four ounces of hard earned breastmilk down the drain. During that bout he did quiet down though- for about two minutes. I think he was trying a new strategy to get the boob. He started making these really long but quiet mouse squeak sounds. They sounded like when you pinch a balloon out on two sides and let the air out slowly- you know that sound? That’s what he sounded like- he actually deserved the boob for that. Wily little guy.

What’s that? I should try a different bottle? I done did that before the original bottle boot camp. I tried out a few different bottles and nipples with him. Then Kylie talked to a few of her mom friends and some said they had the same problem- that some babies just prefer the boob over the bottle, and some will make it known. Arlo decided to make it known today.

The rest of the day has been kind of a blur. I know there have been two more bottle attempts since the first two. I think the third went okay- he ate most of it in between fits of anger- I thought I broke him- but I didn’t- he only ate an ounce of the fourth bottle. Stubborn little squirrel!

Uh oh. I’ve been wearing him on my chest while I’ve been writing this. He’s been asleep but he just woke up and he’s rooting around for boob- standby…

Whew, close one. He started crying real bad so I started getting his last bottle together- but then he fell back asleep- so let’s finish this, shall we…

The day hasn’t actually been all bad. He’s had some happy times- he smiled a lot today- we played games, read books, and went to the grocery store where he stayed awake looking around the entire time. I even got dinner together somehow- New Mexican green chile enchilada casserole (show off). It’s all ready to be put in the oven when Kylie gets home and resigns herself as Arlo’s food supply for the rest of the evening. Not joking either. On days she works Arlo knows it and misses her. When she gets home, she’s all he wants. Me too for that matter.

Somehow I kept my cool today and his crying didn’t really even bother me- like not at all. Sure, I felt bad for the little booger but I never got angry at him. But I’m realizing this parenting thing can be hard sometimes. It’s not all peanut M & Ms and gummy bears. It is fun for me to remember what I was like before I was a dad. I used to say things like,

“All you do is feed it, change it, and let it sleep, right?”

“I am going to have so much time when I’m a stay at home dad.”

Wow, ignorance is bliss, and I am the boob. I wish I could travel back in time and meet that guy while he was saying some of those things. I wouldn’t even say anything to him. I’d probably wait till he was mid-sentence… then I’d punch him in his throat. 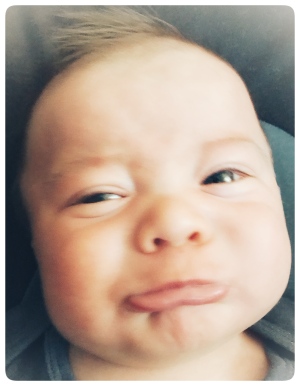