I finished the mural last night. It felt weird this morning to have coffee without a brush in my hand. It hadn’t necessarily consumed my spare time, but it did seem to dictate it. I had tiny goals for it every week- like find a place for Sam I Am, outline Hop on Pop, or deciding what kind of happy little bush to paint near the water. My initial idea of just few characters hanging out turned into twenty-seven characters with a waterfall, a cliff, trees, flowering fields and a trail leading off into distant mountains.

Kylie warned me not to overdo it. “Just something simple,” she said. She knows me though. I think she knew what was going to happen. And it did.

I would like to make a statement though: I’m not going to be one of those parents that go overboard on everything. Sure, my track record is not good so far- I have a dad blog- I painted a ridiculous mural- and the kid’s not even born yet. My only defense is that I’ve just been so damn excited for the last few months. I feel like Kylie’s doing all the work herself by carrying that lug around and maybe this is my way of being a part of it. I mean, if I could, I would take that little parasite out of her belly and put it in mine and carry it to full term. I’d give it back to her for the birth though, because NO THANK YOU- besides, I’m not a very stretchy guy. See there, I’m not that dad that’s going to go overboard- an overboard dad would have said he would give the birth if he could- but I’m just not that type of guy.

Without any further ado…

The “to there” points out the door. The Lorax is a pretty known story about saving the Truffula Trees and the environment in general. 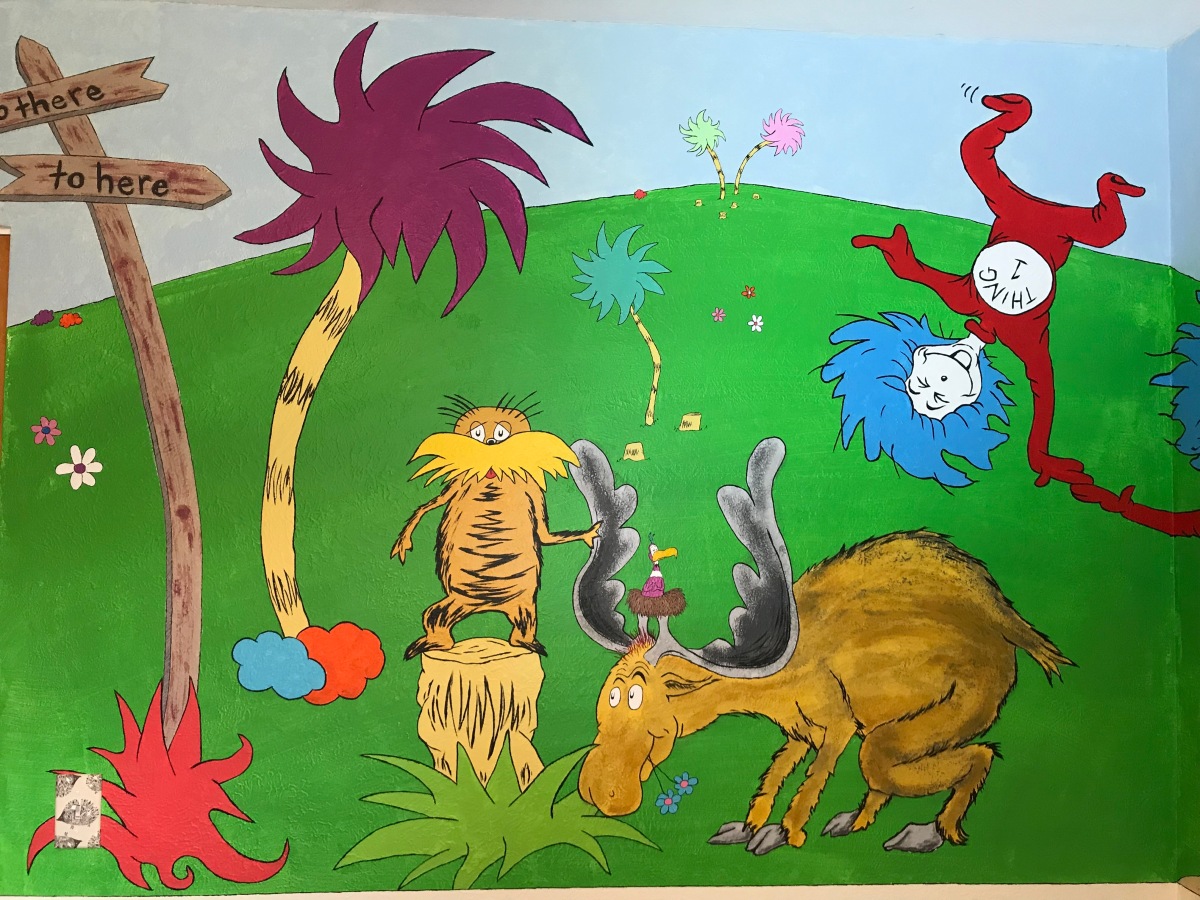 Thidwick the Big Hearted Moose was a new Dr. Seuss story for me and I squeezed him in kinda impromptu.  If you have a chance, try to look up the story- it’s pretty dark for a child’s book. 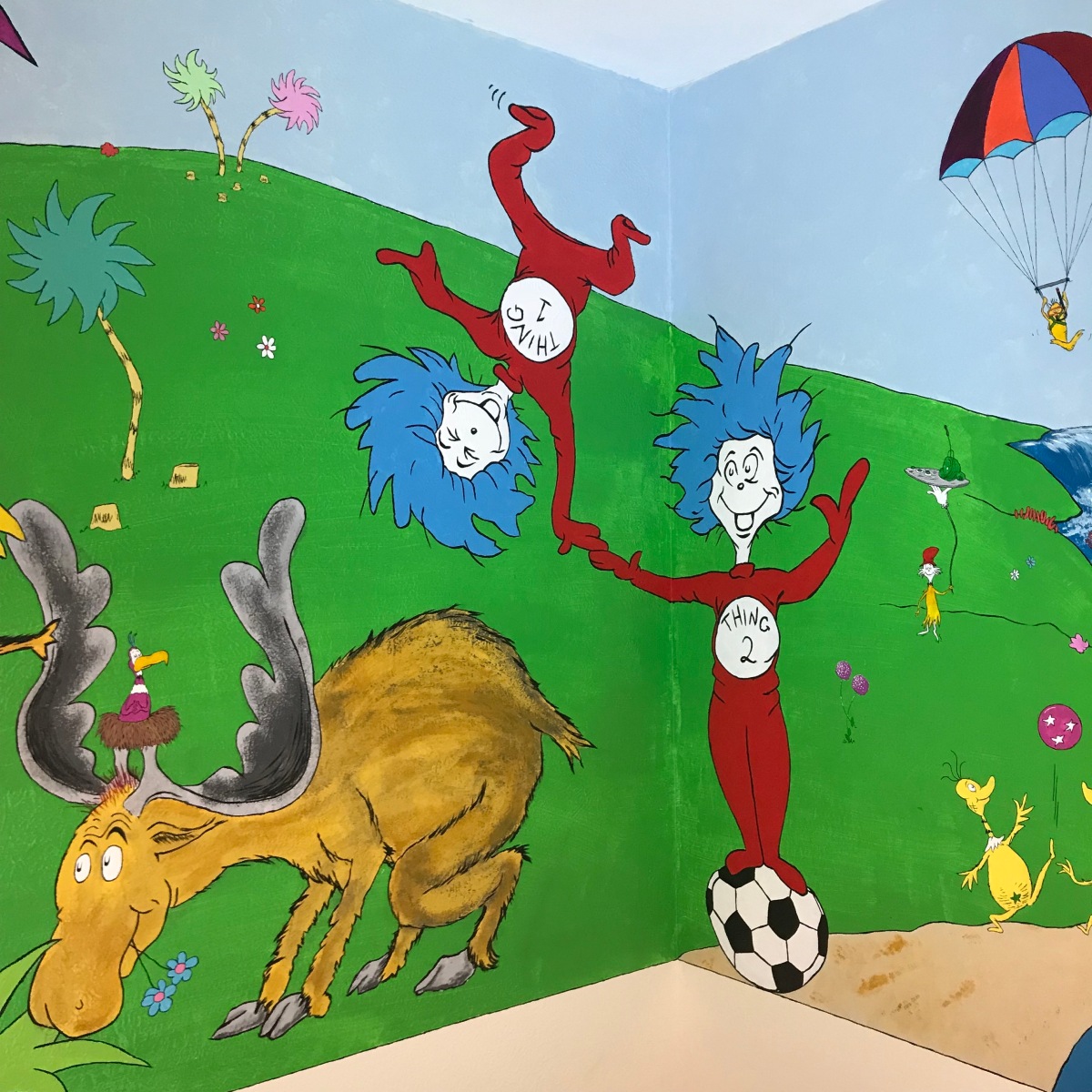 Sam I Am in the back corner above is from an inside cover. It might have been Dr. Seuss’s nod to surrealism. 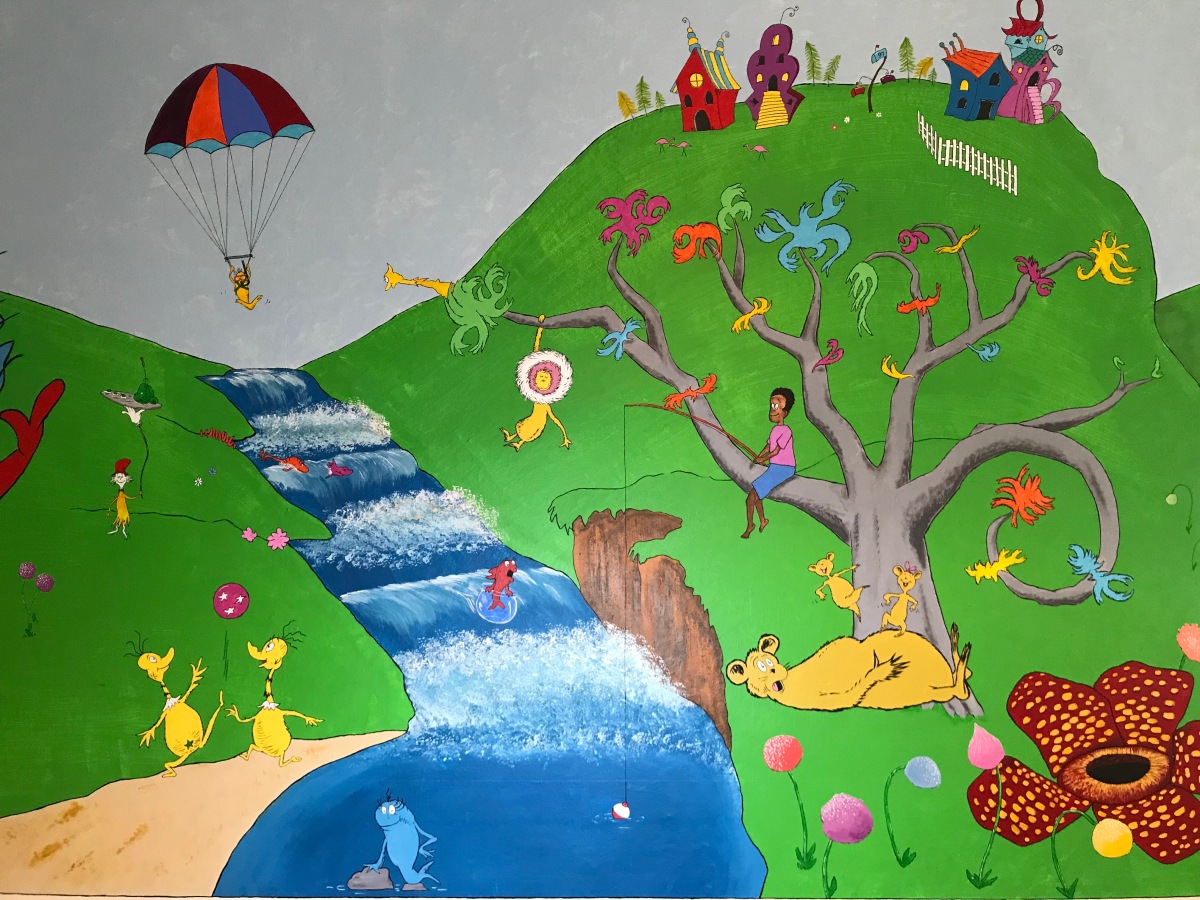 The Sneetches on Beaches is about two types of sneetches not getting along because the starred ones thought they were better than no starred sneetches. They end up getting along. There’s a sleeping Foona-Lagoona Baboona in the tree and all the fishes and a fisherboy. You can’t tell very well, but the fish parachuting down is wearing snorkel gear. If Scout grows up in Missoula the fisherboy sitting in the tree might unfortunately be the most diversity he gets. 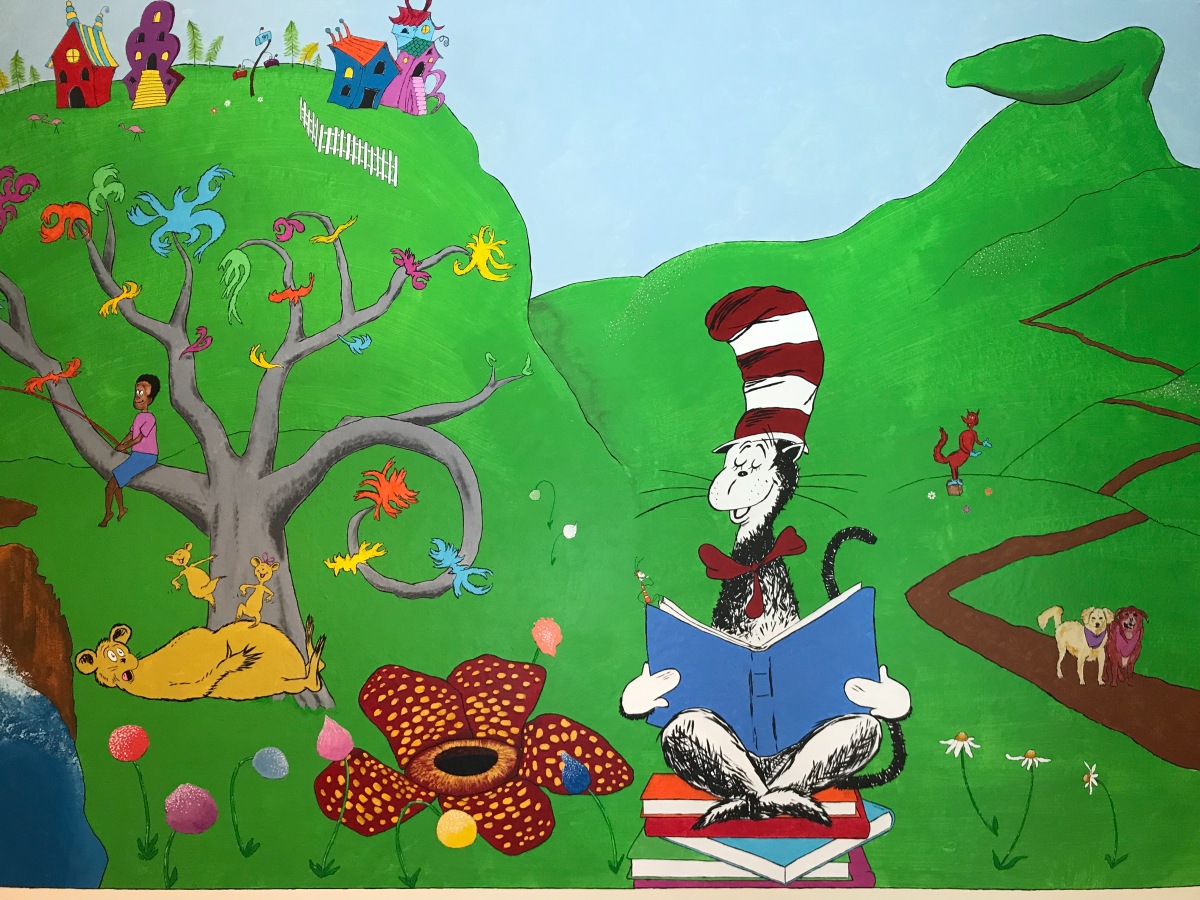 Kylie painted the homes on the hill. Hop on Pop under the tree with a Corpse Lily in the foreground. In real life Corpse Lilies grow to be three meters wide (and they smell like a rotting corpse!) Whatever, I get to have some fun with this mural. The Cat In The Hat is reading stories to a little bug from Thidwick’s book. 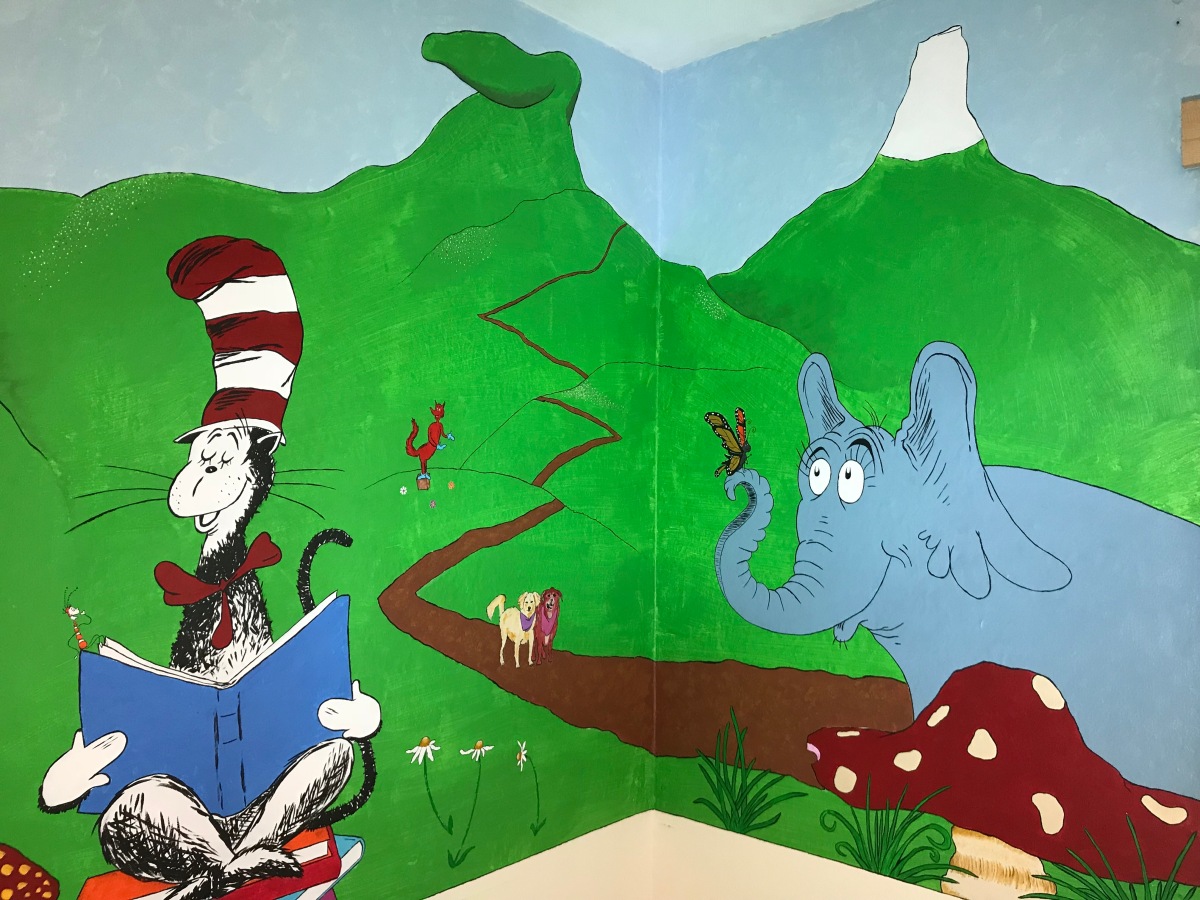 Somebody took a bite out of that mushroom! Horton is listening to the Monarch while Fox in Sox is welcoming everyone down the trail. Our dog Mazzy and her best friend Kodi are waiting for us to get on that trail. There are a lot of other little fun facts and trivia, but you’ll have to stop by the house to hear those.

Well, that’s it. Now let’s place bets on how many years it will be until Scout says, “Papa, can I just have a plain walled room like all the other kids?”

This is not about Scout’s developing baby brain, it’s about my distracted one. Scout is a little over nine weeks now- the size of a grape- or an olive. I’m pretty sure it’s brain is not really there right now. But! Scout will apparently be developing gonads or or ovaries this week- and a four chambered heart! And toes! Cute little toes the size of engorged fleas I imagine. I would show you a general picture off the internet but it’s more fun to imagine a snail without a shell or antennae, floating around in a uterus the size of a grapefruit. Oh what the hell, I’ll draw you one… 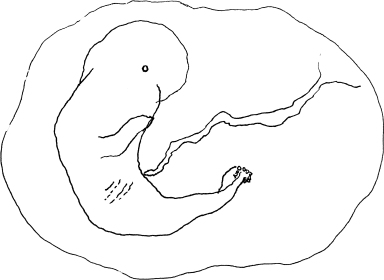 As Scout is growing and progressing, I seem to be losing myself a little at a time. Sure, insert hair joke here but this is serious. My brain is losing focus at home. Weird little things keep happening and I blame Scout. I’m still to young for dementia I think. As of now it seems mostly to do with food. Here are a couple examples: 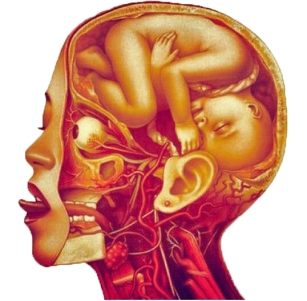 I know those seem like small things- but they are huge in my world- and they’ve never happened before I’ve had Scout on my mind. Luckily I’m too busy at work to make these kinds of mistakes. It’s only been happening at home while my mind wanders. Hopefully it will stay at home and not enter my bartending life. Can you imagine getting a White Russian with raspberry puree instead of cream- because that’s the kind of stuff that might start happening.

But there actually is a syndrome that the partner of a pregnant woman can suffer called Couvade syndrome. I do not suffer from that as far as I can tell. It is also referred to as sympathetic pregnancy. The partner may gain some weight (which I have- but very little), experience nausea, and can even experience labor pains and such. I watched an episode of House once that portrayed a guy in the midst of Couvade syndrome. He was in more pain than his pregnant wife. I’m pretty sure that episode ended with a football coming out of his anus or something- but that could just be my babybrain remembering things wrong- go figure.